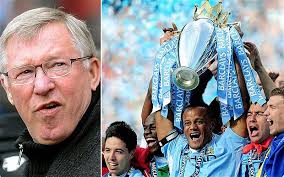 Scared, not because of the Gooner. Unlike the City fan, he has more than enough comrades in this part of the world. He may want to rub it in, but unlike the City fan, he lacks enough firepower. And he secretly knows it. And though he claims that his club, along with mine, are at par in terms of the achievements of the season (or lack of), that assertion, quite oddly, is both true, and untrue. He is simultaneously right and wrong. But he does not scare me. No, not him.

I’m scared because my blood is red, and its not just because of the haemoglobin. Manchester red. It scares me because I try not to act like one. But I can’t really deny the emotions that come with it. It is impossible to be, and yet at the same time, act as if I wasn’t. It is impossible, yet it is still possible. That dilemma scares me. For it forces me to withhold my opinion. Fear of the fact that my opinion on the subject will be considered biased. Or as a consolatory remark. In truth, I am not sure myself which one it is. Objective or subjective. Clear view, or red view. Am not sure. And that scares me. Scares the living daylights out of me.

But the minute you are scared to voice your opinion is the moment you shrink your greatness. It is the moment your darkness obliterates your light.  But I am not inadequate. I am powerful beyond measure. This opinion will not stay in my head. And besides, this article cannot write itself.

Manchester City are champions. They totally deserve it. They have played the better football. Expansive I think is what they call it. They have scored more goals. Brilliant ones too. About 5 or 6 (no, not those 6). They have also shown character. They should have lost against Sunderland. Mario Balotelli and Aleksandr Kolarov ensured they didn’t (of course, after sorting out their little spat). They should have lost against Chelsea. But Carlos Tevez reversed the pass. Samir Nasri clinched it. They should have given it up. Mikel Arteta sought to convince them so. But they did not. And now, they are the best in Manchester. Now, they are the best in England.

Don’t talk about the money. Yes, His Highness Sheikh Mansour bin Zayed bin Sultan Al Nahyan has pumped in the millions. But fuelling a car doesn’t mean that the car will win the race. Money buys talent. Money buys class. It does not buy championships. It only seeks to steer. Money can buy Sergio Aguero. It can’t buy that last minute winner. That final day drama. It can’t buy a moment of history. It can only precipitate it.

Deserved champions they are. But also as well in the League, deserved runners up come behind them. Manchester United. For the 7th time in a row, they have finished either first or second.  And though their head to head record shows a huge gulf in class, the overall league table doesn’t.  Level on points. City won it on goal difference. It is an illusion. So far behind, yet so near.  The fact that the last day was so dramatic was due, in part to United as it was to City. United, in truth, pushed them to the limit. United, did what they had to. That meant that City had to as well. It wasn’t a procession. It was nerve-wrecking. It shouldn’t have been. It should have been a pleasure cruise. It wasn’t.

Why it wasn’t that easy for City doesn’t matter. They have reached the pinnacle, regardless. And there is no use mulling over the quality of the United squad. That is never an excuse. Never from Sir Alex Ferguson. Never from Arsene Wenger at Arsenal. It is the reason they overachieve. It is the reason they are 2nd and 3rd best, when all odds point to them not being 2nd and 3rd best. It is the reason it hurts to be second, or third. Because it was expected that 1st is the only objective. Even when it does not seem realistic. The belief was instilled. There is never any room for excuses.

But what happens  when 1st place does not materialize?

You react. He reacts. He always does. Its in his DNA. It probably hasn’t been in Wenger’s, at least for the past 7 years. But now, there are signs that it is. Wenger is looking to do what the knight has always done. React.  He has been doing it for years. Reacting to everything. To Liverpool’s tradition. To Kenny Dalglish and Jack Walker’s Blackburn. To Kevin Keegan, when he would have ‘absolut’ly lov’d it if we beat ‘em.’ To Wenger’s football. To Jose Mourinho’s pragmatism. To Rafa Benitez’s ‘facts rant.’ To Carlo Ancelotti. He has always reacted. And now, there is the Roberto Mancini problem. Now, what will he do.

I assure you that for as long as Sir Alex has breathe in his lungs and chewing gum is still edible, he will react. The problem will be solved. It may take one year. It may take two. Eventually, it will be solved.  The cool Italian will eventually feel the pressure. He will be scrambling for his scarf. The noisy neighbours will eventually be silenced. Let them have their party now. They deserve it. A time will come when it will be their turn to watch us have the party as they have always done. Sir Alex will react. He always does.

And when he does, Manchester United will be back.

Galimo Askumo
An explorer, an infomaniac and a hippie. I got tired of wanting to read detailed, long form articles on various topics that interest me so I decided to write about them. My username is an ode to the last two known members of my family tree which goes back 11 generations.

By Mike Njoroge The mixing and matching is evident. Like a Chemistry lab professor mixing…

By Mike Njoroge   I, for one, will be applauding. Applauding because he…
MAN UNITED 2011-12 SEASON REVIEW